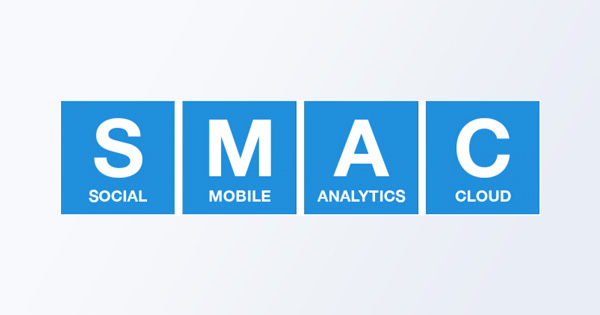 SMAC: Social, Mobile, Analytics and Cloud impact our work and personal lives. For example, have you seen the movie Up in The Air (2009)? If not, put it on your list. If you did, you were probably a bit shocked by the virtual approach to firing people. I certainly was. Seven years later, in 2016, it is common practice.

The first time people got fired by text it was news. Today, not so much. More people work in virtual teams and have never met their bosses or colleagues in person.

We communicate through texts, we collaborate online, and we use apps. Ironically, the one thing we use our phones less frequently for is to talk to people.

In recent years, SMAC has led to new (and socially accepted) ways of communicating with each other and to new ways of work. If you’re in HR, Cloud most likely became the focus of attention in 2015.

If not, it most certainly will somewhere down the road. It’s a big change that you will need to properly prepare for. So this post will not be about shiny new things to watch out for in 2016. Instead, I’m sharing things you will need to do to be prepared for SMAC and stay relevant.

Let’s look at cloud first. If you’re on the market for a new HR system, you’ve probably picked a cloud based system. It relieves you from the need to uniquely customize the system, it’s accessible anywhere to everyone with a login and you can pay as you go.

While that is a huge advantage over onPrem HR systems, there are still a few things you need to keep in mind. How do you keep your employees’ data secure and what about the vendor’s business continuity? How do you deal with new privacy laws being introduced (eg India, Russia) and the Safe Harbor agreement being cancelled. It’s critically important to know where the cloud vendor stores data and what happens in their data centers.

Cloud support and maintenance is another topic that requires attention. Despite the popular belief that the cloud vendor will take care of this, cloud systems need maintenance just like any other IT system. Vendors regularly update the systems and expect you to test new versions. Clients can’t live with the standard and would like some customizations, and interfaces still exist.

While the effort is usually less than for onPrem systems, maintenance and support do not disappear, so you need to take this into account when you create your cloud migration plans.

Even if you would like to move everything to the cloud, for some systems the risk of migrating is just too great. Fortunately, there is a 3rd option: Cloudify. Cloudify wraps a layer around your onPrem system, and lets you use it as if it were a cloud system.

The vendor will take care of hosting your system in the cloud, provide maintenance and support, apply patches and updates and charge you for use. This means you will be able to shift Capex into Opex, even if the underlying system is ERP-based. It is a very feasible and interesting option for payroll and time systems. They are often heavily customized and have a high migration risk.

SMAC: Social and Mobile use to increase

Social and mobile are native to cloud based HR systems. It’s time to start thinking about mobile use instead of desktop. While most of the Western world has grown accustomed to the desktop, there’s a whole world out there that has never used one and moved straight to mobile: it’s all they know. SMAC permeates our lives.

With the shifts in workforce, with younger people coming into the workplace, with virtual teams working across the globe, mobile and social become the new normal. We’ve all watched the death of the traditional performance process in 2015 – made possible only through the advance of social communication.

What has happened to the performance process will also happen to other HR processes: workers using mobile tools to sign up for shifts, to log hours, to communicate with each other. So the important thing is to ensure that new HR technologies are fully mobile and social enabled and they are so from the ground up, not as an afterthought.

Mobile and social allow everyone to continuously give and receive feedback – that’s not to say they replace the conversation, but they enable instant feedback from other sources than a direct manager: customers, co-workers and anyone that you interact with on a regular base.

Without mobile and social tools, this would not be possible. As part of SMAC, Mobile and social also foster collaboration between your employees and others outside of the company network, facilitating product and services development, customer service and feedback loops. Expect social and mobile to play a crucial role in every conversation – and who knows, maybe they will finally replace your overflowing Inbox in 2016.

And finally analytics – how is your data scientist team performing these days? If you have to believe everything you read, if you don’t have one, you are way behind. However, while few companies seem to have cracked the code, it’s safe to say that with analytics most are still at the beginning: getting the basics right.

And the basics are formed by good, reliable data and reporting. It is critically important to first build a solid foundation while keeping the endgame in mind. Without that foundation, you will never be able to properly analyze data and make predictions.

It’s easy to get lost in an abundance of data and KPI’s. Most cloud systems offer native analytics, but the reality is that many dashboards sit unused because leaders do not understand what they mean and therefor can’t use them in business decisions.

The reason for that is simple: no roadmap and way to many data points to choose from. So simplicity is the key: start with reporting, while gaining insights and experience first. If you feel comfortable with that, then head into analytics for a few, well- chosen items that are critically important for your business leaders.